Welcome to radians to degrees, our article about the conversion of angular measures. The unit symbol for radians is rad, and degrees are often abbreviated as deg. So, if you have been looking for rad to deg, then you have also found the right page. The same applies if you had entered radians to ° in your favorite search engine, because ° is the degree symbol which denotes the angle measure that divides a circle into 360 parts. Radians are SI derived and the standard unit, whereas degrees are non-SI, yet accepted by the organization International System of Units (SI). Keep reading to learn everything about rad to degrees, and make sure to check out our converter further down.

Radians are defined as circular arc / radius of the arc, so if s stands for the arc’s length, and if r denotes the radius, the angle theta (θ) is the subtended angle in the unit radian: s / r = θ, or s = rθ. As you can see, this ratio of the two lengths s and r does not naturally have a unit symbol as it is a pure number and as such as dimensionless quantity. Therefore, the unit symbol rad is usually omitted. For a circular arc taking on the form of a complete circle rθ = 2πr (the circumfence of a circle). It follows that θ = 2π, which answers the question how many radians in a circle. In turn, as detailed on our home page, the answer to how many degrees in a circle is 360. In other words, a complete revolution is 2π radians, equivalent to the magnitude of 360 degrees.

How to Convert Radians to Degrees

Now that we know the relation between degree and radian, here’s how to obtain rad in deg: Divide the angle in radian by pi, and multiply the term by 180°.

In any case it is recommended that you also check out our converter further below.

The formula is to be used as this: simply substitute rad with your angle in radian and do the math. If you want it even easier make use of our calculator in the next paragraph.

To use our converter insert the magnitude of your angle, our tool then does the rest automatically for you, including rounding the result to nine decimal places.


Don’t press the button unless you want to swap the units. More calculators like this can be found following the links useful sites, located in the sidebar of the home page.

Our frequent conversions include:

BTW: If you come across the terms degree of arc, arc degree, or arcdegree, this is the full spelling for the unit of measurement of an angle, to differentiate it from temperature (degrees).

Ahead is the explanation of the form search conversions which can be used to convert angles, because many values have already been converted by us.

In case you are primarily interested in the result, and making use of our angle conversion tool is inconvenient, such as, for example, whist using a mobile phone, you can utilize our search form.

Simply insert your query in the aforementioned form, and you will be redirect to a result page, which displays the closest match for your particular query.

The results most likely include the conversion you have been looking for. The form is displayed to you in the sidebar for desktop and tablet computer visitors.

Users having a mobile device need to scroll down towards the end of this page or click on the search menu item. To use the form type x radians to °, provided that x is you angle in rad.

Here you can change degrees to radians.

In the following paragraph we will review the FAQs in the context of this article.

The frequently asked questions about the subject of this page include, but are not limited, to:

If you have been reading our information from the beginning, then coming up with the answers should be easy for you. However, if something remains unclear just get in touch with us.

Make sure to understand that it is the unit radian, not degrees, that makes math easier. This may seem counter-intuitive, but that’s why in trigonometry the arguments are often stated in radians.

Degrees indicate how far we tilt our heads to conceive angles and rotations, whereas radians, which can be thought of as radius units, are about the distance on an arc traveled.

This essentially means that the unit degree is from the perspective of an observer (an arc), in contrast to unit radian which reflects the viewpoint of a mover (a straight line).

Next you can find the conversion of frequent angles, followed by the summary of our content.

You have reached the end of our information regarding the unit conversion of plane angles, which we summarize using this image: 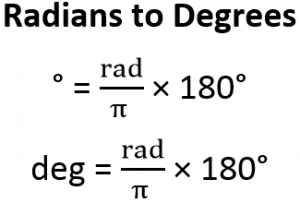 Visitors who have been searching for how many radians in a circle, radian definition, or a similar term should also have found theirs answers.

Here are the equivalences of some common angles:

For feedback, including all questions and comments, use the designated form at the bottom of this page. Alternatively, you may send us an email with a clear subject line.

If our information and the converter have been useful to you, please hit the social buttons to let everybody know about our website, and don’t forget to bookmark us.

For further information check out the sites listed on our homepage. Thanks for your visit.