Welcome to degrees to radians, our website dedicated to the conversion of angular measures. If you have been looking for deg to rad in the search engine of your preference, then you have come to the right site, too. Both, radians as well as degrees are measurements of plane angles, the former is a SI derived and the standard unit for measuring angles by distance traveled, the latter is a SI (International System of Units) accepted unit which indicates how far we tilt our heads. Read on to learn how to convert from degree to radian, and note that whilst the unit degree intuitively seems the correct choice for measuring rotations and angles, it is in fact the unit radian that makes math easier.

How to Convert Degrees to Radians

Now that we know the answer to what is a radian, here’s how to convert degree to radian: We divide the angle in degrees by 180° and multiply the term by π.

From the explanations above we can come up with the formula, also known as degrees to radians equation:

To use the formula substitute deg with your angle in degrees and do the math. From the above (by replacing deg with 360°) also follows the answer of how many radians in a circle: 2π.

Easier than applying the formula is using our calculator in the next paragraph. Our tool is straightforward and you certainly don’t want to miss it.

There, in our calculator, enter your angle in °; our calculator does the rest automatically for you, rounding the result to nine decimal places.


Hit the button only to swap the angle to the unit radian. More conversion sites can be found in the sidebar, under useful sites. And the most frequent degree to radian conversions on our site are:

BTW: Make sure to understand that degree of arc, arc degree, and arcdegree is the full spelling for degree in the context of this article, should you happen to come across these terms.

In the next section of our article we are going to explain how the search form of our site can be used for converting degrees to radians, for we have already conducted many angle conversions.

If you are mainly interested in the result of an angle conversion, and if using our calculator is not practical, for instance when using a smart phone, you can enter a query in the search form.

The form is labelled search conversions and located in the sidebar for desktop and tablet computer users. Visitors having a mobile device can find it at the bottom of this page.

There, in the aforementioned form, with x being your angle in °, you may enter x deg in rad, to be taken to a result page including the post containing your conversion.

Here you can change radians to degrees.

Next, we will have a look at the frequently asked questions about the subject matter, e.g. how to turn degrees into radians, followed by the summary of our information.

The FAQs in the context of this page include, but are not limited, to:

Using our information and tool, you can answer these questions with ease. Yet, if something else remains unclear get in touch with us.

Last but not least we would like to emphasize that many trigonometric functions have their arguments more naturally are expressed in radians than degrees.

And remember that whilst the unit degree is arbitrary and accounts for an observer’s perspective, the unit radians reflect the viewpoint of the mover such as in y = arcsin(x) with −π/2 ≤ y ≤ π/2.

Finally, as radians are the distance along the unit circle, it is much easier to change rotational speed in rad to linear speed than in °: use linear speed = angular speed × radius of the rotation.

Ahead you can find the conversion of common angles, as well as the summary of our content.

You have made it to concluding section of our information. The following image sums our content about the unit conversions of plane angles up: 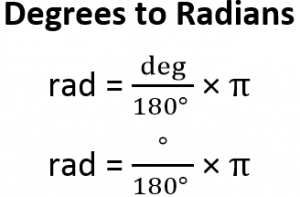 If you have been looking for how many radians in a circle, degrees to radians in terms of pi, then you have, in all likelihood, found the answers, too.

The same applies if you googled for degree to radian converter, angle to radians or something similar like, for instance, relation between radian and degree.

Last, but not least, here are the equivalences of common angles:

For questions, comments and everything else you might have use the comment form below or send us an email with a clear subject line.

If our content has been useful to you, then don’t forget to bookmark us and to hit the sharing buttons to let the world know about our website. Thanks for visiting degreestoradians.net.